From field to exhibition

Since our inception in 2012 we have been privileged to garner the support of some of the worlds’ leading food photographers. The immensely influential and respected Jean Cazals became our first-ever Pink Lady® Food Photographer of the Year.

Jean Cazal’s winning image ‘Black Pigs’ was taken in the South West of France and Jean gave us a special insight into his award-winning shot, “It was part of a book for the Club Gascon restaurant in London, a Michelin-star restaurant specializing in foie gras and produce from the Gascony in France. The book that I shot which includes recipes and location won best French cookbook! The black pigs produce the best ham in France. Fed with acorns and other purely organic food, they are the equivalent of the Black Iberian pig or 'Pata Negra' in Spain which make the Iberico ham. They are very intelligent, small and gentle animals.”

Pink Lady® Food Photographer of the Year, now in its fifth year, continues to receive thousands of entries, not just traditional food photography, but all aspects of imagery from field to fork. Every photograph and film carefully explores our relationship with what truly is the stuff of life. 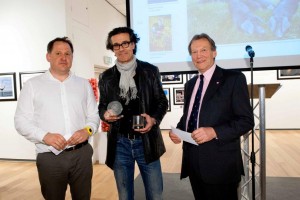 Jean is a London based food photographer, he gained his BA Hons in Visual Communication at the London College of Communication. After a successful decade of portraiture for editorial, advertising and design clients, he had a stint for 2 years shooting commercials. Loving food and travel for years brought him naturally to turn his lens on food and lifestyle which he thoroughly enjoys!

One of Jean’s core promotional activities is with our Food off the Press sponsor, Production Paradise. As a member of Production Paradise, Jean features in regular Spotlights, blogs, social media and more. You can take a look at their 30 November, 2015 interview with Jean here. We found it to be open, honest and inspiring. Our favourite quote from the piece has to be, ‘Food photography has reached a level in the last 20 years that no other type of photography has reached.’

Please take a moment to connect with Jean & Production Paradise on social media: