Get snapping and support Action Against Hunger!

As we embark on a New Year we wanted to share with you some of the work our chosen charity, Action Against Hunger, achieved in 2016.

Here is an update from Catherine Davies, Corporate Partnerships Manager:

‘It was another rollercoaster year of highs and lows in our fight to end child hunger. The challenges facing too many families around the world remain unimaginable. As you may now be aware, this summer we were finally able to re-access parts of northeast Nigeria that had been cut off from the outside world for nearly two years by Boko Haram violence. What we have found in these newly accessible communities of Borno State has been heart-wrenching. In some parts, families are facing famine conditions, with nearly 250,000 young children teetering on the brink of starvation. Thanks to your support, we are one of the few humanitarian organisations present in these hard-to-reach areas. Our teams are doing all they can to save as many young lives as possible. We have provided families with safe drinking water, emergency shelter, essential relief items, food, and emergency health and nutrition services, to help them overcome the most desperate of times.

This is Ummi Mustafa, just 22 months old, and her mother. Ummi’s mother brought her to Action Against Hunger’s mobile clinic in Monguno, where she was admitted for outpatient treatment for severe acute malnutrition. In Monguno, our rapid response teams admitted over 250 malnourished children for life-saving treatment in only 10 days.

In Yemen, the future of millions of young children is at stake as the country, in the grips of a violent conflict, is facing one of the worst humanitarian crises in the world. The conflict between Al Houthi and the Saudi-led coalition, which began in March 2015, is severely affecting the poorest country in the Middle East.

Airstrikes, embargos and the rising prices of basic commodities has prevented many families from accessing food. An estimated 3.2 million people have been driven from their homes by the fighting and 4.5 million people need nutritional help – the majority, urgently. Nearly half a million children (462,000) are suffering with life-threatening malnutrition.

Our brave colleagues are doing all they can to reach as many children as possible with life-saving support and nutrition treatment, but the needs are vast and the situation is complex and dangerous.

Thankfully, despite this sadness, there have also been plenty of reasons to feel hopeful as we close 2016. Firstly, this year we travelled to Mali where, with our partner - the innocent foundation, we are empowering local communities to diagnose and treat children with severe malnutrition at home. The results are inspiring. By proving that we can reach more children more effectively and at the same or lower cost by working through community health workers, we can change the way Ministries of Health all over the world treat malnutrition, reaching many more of the 17 million children suffering today.

And perhaps you remember Prahlad? Three years ago, we travelled to India with a team of food enthusiasts to raise funds and awareness for children with severe malnutrition. While we were there, we met Prahlad, then just 18 months old, who was tiny due to being severely malnourished. He weighed just 4.4kg when he arrived at our nutritional rehabilitation centre for life-saving treatment- not much more than a new born baby.

Having been spotted by one of our trained community health workers and admitted to our nutrition centre for care, after 24 days of treatment he was discharged with regular follow-up care 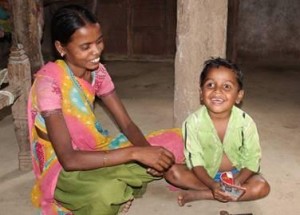 and a food basket. And three years on he continues to thrive.

Now five, Prahlad is lively and smart, mimicking his elders. He knows everyone by name in the village, and is always keen to recite his alphabet and numbers to anyone who will listen. ‘Prahlada’ in Sanskrit means ‘filled with joy’, a name that couldn’t be more fitting for the little boy today.

His mum Rekha said: “My son would have died without treatment and without the reassurance I got from Action Against Hunger staff.”

We want to say a huge thank you for being with us on this emotional journey towards a world where all children can not only survive, but thrive. Without you, we wouldn’t be able to do what we do."

Make sure you head over and check out our ‘Food Sn-apping’ category in support of Action Against Hunger for pictures of food - any time, any place, anywhere – taken on your mobile device.

Only £5 to enter. £2 for every image entered in this category will go to Action Against Hunger (Registered charity no.1047501)

You can also hear from Jenny at Action Against Hunger in this pod cast with Share Radio .