On Wednesday 6th May 2015, Australian born David Griffen was announced as Pink Lady® Food Photographer of the Year 2015 for his image ‘Smoked Wings’.

David’s image was the winner of the Philip Harben category for Food in Action and following the Judges’ dinner at the Saatchi Gallery in March it was selected as the overall winner for 2015.

Talking of the image and of becoming a Finalist David said, ‘I was shooting in Kuala Lumpur this January specifically for the competition, so I am quite relieved a shot made it through to the finals!’.

Asked about being a food photographer and his work he said, ‘I have a passion for both food and photography, and could not imagine doing anything else. I live in a rural part of Cornwall, and am surrounded by a fantastic food culture. My work is influenced by the plough-to-plate aspect, I love to shoot the produce and processes as much as the finished dish. Travel is key to refreshing my perspective, I find it invigorating and it inspires me to push the work along when I return to my Cornwall kitchen studio.

I am more influenced by the chefs I have been fortunate to work alongside than photographers - I tend not to look at the work of other photographers as much as perhaps I should, but this is because I want to define my own style, and not to imitate others. I am inspired by beautiful ingredients and simple cooking. I love a messy kitchen surface, and I am also very much inspired by beautiful props and pottery - I have a large and ever growing props collection in my Cornwall kitchen studio. I contribute to major publishing projects on a regular basis (cook books / apps / recipe websites etc...). I have been influenced by my travels to Moscow for a cook book project last year, and this year am working on a Malaysian cook book. I grew up and trained as a photographer in Australia, and believe that the quality of light there still resonates in the vibrancy of my work.’ 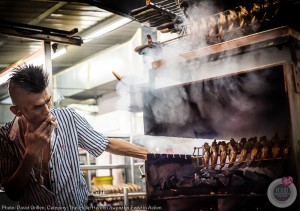 Costing just £50GBP a year and including 5 FREE ENTRIES, worth £30 alone, Pink Lady® Food Photographer of the Year membership is an offer too good to miss!

Open to professional and amateur, old and young