Claire Aho, 1925-2015, was born into one of Finland’s greatest cultural and artistic dynasties. Given her first camera at the age of 10, she was a trailblazer in many ways – as a woman working as a commercial photographer from the late 1940s at a time when almost no women were working in this field, in her use of colour photography and in her unique photographic blend of style, wit and vitality.

This year, we are hugely honoured to announce The Claire Aho Award for Women Photographers, in memory of Claire. The Award is intended to both celebrate and encourage women photographers of every age across the globe.

We spoke to Jussi Brofeldt, Claire Aho’s son and Chairman of Aho & Soldan Photo and Film Foundation, who kindly shared with us his memories of Claire, and more of her inspirational photography.

‘It’s a huge honour for us to launch this inaugural award. The first time Jussi and I spoke on the phone, we talked for almost an hour. Then he flew from Stockholm to London to discuss it further. I was thrilled when he told me the Foundation was happy for us to create the Award in his mother’s memory. I should love to have known her, but I hope and believe this is a fitting way to celebrate her life and achievements.’ – Caroline Kenyon, Director, Pink Lady® Food Photographer of the Year.

What was Claire’s biggest inspiration?

‘Colours. She always said ‘‘colour, colour everywhere.’’ This was Claire’s motto, and the name of her favourite exhibition. This started when she was a child with her grandmother – Claire was her grandmother’s favourite model. When she painted, Claire sat with her and rolled cigarettes for her. In the cigarette box, she carved out a hole and showed Claire to look through it – It was a lens. This was how she was taught to frame an image, and how to look what to aim for and focus. Her grandmother also painted in colourful oil tones, and from this I think Claire gained inspiration to guide her. Then came pattern, and a sense of composition. It was in her blood, in a sense.’

Claire was part of one of the most influential families in Finnish cultural history. Claire’s grandmother, painter Venny Soldan-Brofeldt (1863-1945), and grandfather, author and journalist, Juhani Aho (1861-1921) were known as the ‘artist couple’ of their era. Venny had also been Claire’s father, Heikki’s, inspiration by giving him his first camera at the age of 12. In 1924, Heikki Aho (1895-1961) and Björn Soldan (1902-1953) established their legendary documentary film production company, AHO & SOLDAN, of which Claire joined in the late 40’s. Claire had also opened her own commercial studio, becoming a pioneer of Finnish colour photography.

What was it like for Claire being a women photographer back then?

‘Claire was always extremely warm; she had a sense of humour. Claire held a very humanistic view on people, and she was also very accepting, people really felt relaxed with her. She could speak with everyone in such a relaxed way and she was always positive. The most positive person I have ever known.’

‘In the 50s and 60s, she was the leading photographer in the field. In the 50s, Claire was the only women among 400 photographers to be contracted by Warner Pathé News in New York. She worked for them for 10 years. She had so many jobs from all over. Especially, as at the end of the 60s, you had to be very political to continue to get jobs. Claire was working alone almost all this period, but she had never seen this as a boundary. Photography was simply just what she wanted to do. In addition to an artistic heritage, she was part of a family history of strong women.’

‘Claire was a photographer in another time. Resources after the war were scarce, and to be a women photographer was rare in the industry. Claire had a nature of rolling-up her sleeves, and just doing what came naturally to her creative mind. Generations of artists ran through her family. She believed if you had something within your vision, you just do it.  If you took a helicopter perspective across photography, from the time she was active, what has really struck me in her images, is that many of her images seem more contemporary. She was ahead of her time.’

What would Claire think of our Claire Aho Award for Women Photographers?

‘She would be very happy and proud. She would also very much like the attention we are drawing to photography on an international scene, as she knew how much energy every photograph and image took. From creative energy, to thought and feeling.’

Claire had originally trained in photography whilst travelling with Aho & Soldan film crew, as well as studying journalism and sociology at the university. From Claire’s fashion shoots for magazines in the studio, to products shots of an array of consumables, Claire’s career encompassed so many photography styles.

How did Claire’s photography change throughout her career?

‘In the 60s, Claire did a lot of food styling with her photography, setting tables depending on the season. There was a larger context around her image ‘The Fridge’. It was the period after the war. The photograph was taken in 1952, the year of the Olympic Summer Games where Coca Cola was sold in a bottle for the first time in Finland. Claire was both photographing and filming during this time. She had travelled around to create ‘country of colours.’ This film and these images symbolised how food should be eaten and enjoyed after the war. One can imagine the lack of food during those years, and to suddenly be shown this new fridge and food. And to be shown this in colour film. It is globally symbolic – not Finnish, nor American, it is a universal appreciation that there is food. It is human to be able to open a fridge and have food, and within this, a sense of security.’

Claire spoke about this in her image of ‘The children, the bear and the fridge’ sixty years after the shoot.

‘’The children, the bear and the fridge I hoped to create an image which, on one hand would be filled with colours and humour and thus catch the eyes of the beholder, on the other hand give a familiar and comfortable feeling, but also draw attention to the details. I wanted the viewers to get an immediate connection with the image. Colours are all over and need no explanation. The little thirsty bear on the floor is a warm and comforting friend of any child. The whole setting, I hope, breathes a joyful familiarity - as in any home anywhere. At the same time it is obvious that everything is set up (just look at the studio floor) and that the white fridge, the silent main character of the image, holds the promise of ever more well tasting treats at any time. As long as one has one. Perhaps, the fridge thus became as familiar in some new homes as the situation in the image.’’

Claire is known as the ‘Grand Old Lady of Finnish Photography’, but her work is internationally recognised. Photography, and specifically that of food, connects us all. The exhibition ‘MOMENTS in the building of a nation’ displayed at the United Nations Headquarters in New York, Geneva and Nairobi as well as at the Finnish Parliament Building in Helsinki in 2017, represents more than just Finnish history.

‘Claire’s exhibition ‘MOMENTS’ really represented so many ways of how to be in a democratic nation, trying to create small fragments that give us an idea of that nation. It really showed how we are all connected. Even since that exhibition, I remember a UN Diplomat from South America looking at a particular image of a family in rural Finland – he said how it reminded him of home. These images were a World apart, but there were so many connections between them.

We are in such a connected world. United Nations World Food Programme, partner to your awards has just received the Nobel Prize 2020. I live in the Old Town in Stockholm, near the Swedish Academy. Claire’s grandfather, Juhani Aho, was also nominated for the Nobel prize for his literature sixteen times.’

What are your fondest memories of Claire?

‘I often joined her as a child, and what I really remember is that she always did the most obvious thing. She never questioned anything. In the 60s, Claire borrowed a dark room studio in the centre of Helsinki.  She went on evenings to this place when everyone had left. I must have been 7 or 8, and I remember being very afraid of the long dark corridors and always dreading going. But I found it so interesting to see how photographs came out of nowhere in the darkroom. I remember the atmosphere – the red light and the smell of all the chemicals. It was magical to see the image on the paper. I joined her on many shoots, where she photographed in various homes. I remember one place where there was glass blowing, which had fascinated me.’

Jussi, of all of Claire’s incredible shots, is there an image that will always stand out to you?

‘There are many, but this one is among the top images on my list. It was taken around 1967/68 in Helsinki. The dog, the Fox Terrier is named Orchidé. Her off-spring, Pepi, lived until 1984. The boy is of course me. I remember the situation, at our home. The image was part of Claire´s exhibition "Helsinki 1968" in Kiel, Germany the same year and at the Helsinki City Hall and in a photo book with the same name in 2010.’ 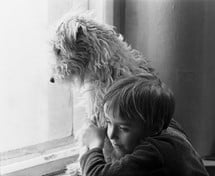 Jussi will be joining our distinguished judging panel this coming February. We are inviting women photographers around the world, of every age, and whether amateur or professional, to submit images to this special Award. Entries may show food and how it touches our lives in any setting, from studio shots to reportage.

“This is very meaningful for my family and me to have my mother celebrated in this way. We hugely look forward to receiving the entries and seeing work from around the world.”

Discover more from Claire herself in the video below, where she spoke about her incredible life work...

Inspire yourself with incredible photography in our Finalist and Commended Galleries.

Claire Aho Award for Women Photographers, and other categories of Pink Lady Food Photographer of the Year are open until February 7 2021.